Venturous Group’s Tam: “It is not the town that matters, but the smartness” 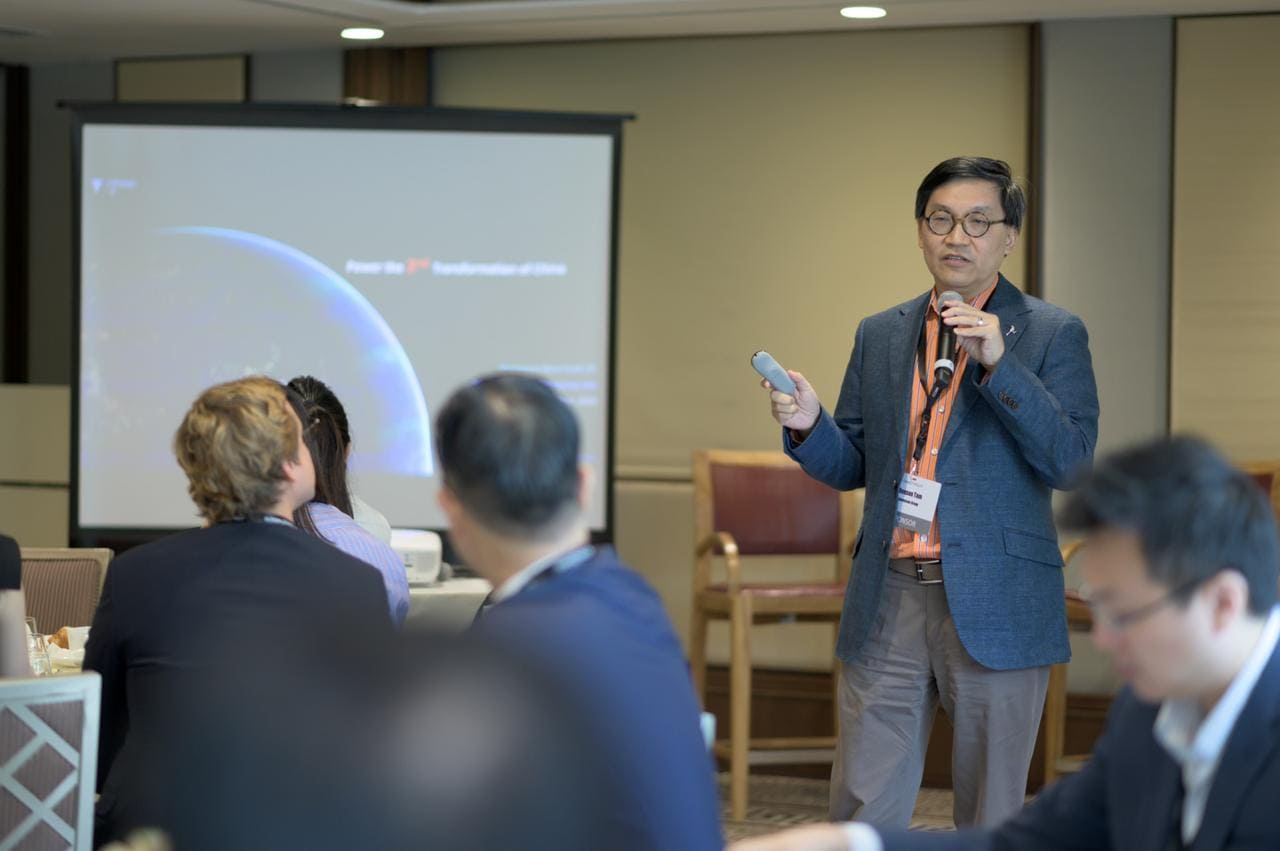 With a mission to transform cities into smart cities, Beijing-based Venturous Group is investing in a portfolio of strategic technology verticals such as smart energy to transform urban areas across China.

Rather than operating as a typical fund that invests in a theme of individual companies based on the specialty and expertise of the fund manager, Venturous Group is seeking to build an ecosystem by identifying synergies between its technology portfolio companies and finding ways for them to deploy their capabilities in the transformation of cities.

Venturous Group recently changed its capital structure from a fund to a corporation to scale up its capital raise beyond family offices and offer better liquidity to investors. It is expanding its portfolio of smart city and urban technology companies to grow from individual customers to communities, towns and cities nationwide.

“We are different from a normal fund. We will be venture capital (VC), private equity (PE) and provide incubation,” Venturous Group’s chairman and founding partner Benson Tam said. “I don’t want to make the money from fees. I see that as a disincentive. We have set up the structure so that until we deliver the performance, we can’t touch the options – meaning, it really is pay for performance.”

The private equity veteran added, “My objective is enduring compound returns, just as we invested in Alibaba twenty years ago. Most people view it as two separate worlds, but I see it as two merging worlds. By making it liquid, people who are investing can still hold on to it long term.”

Those who have invested during the first financing round of Venturous Group, including Tam and members of the management team, own 100% of the company, with the management team in control. The formula provides that over time, through high performance delivery measured by the share price, additional ownership can be transferred to management. This staircase management-incentive structure seeks to reassure investors of aligned interests.

As the business grows, it will raise more capital from new investors. Meaning, that unless the original investors match the new capital, their ownership will be diluted. Yet, this will be partly compensated by the expectation that each fundraising round will have a higher valuation.

Along this process, the valuation of the company will be different at each round, and therefore will reward early round investors for their slightly higher risk, according to Tam.

“We believe the future is not standalone applications and solutions, but will involve integrated solutions,” Venturous Group’s chairman said. “For example, apps on your phone can solve individual problems, but there is an operating system underneath, which sets certain rules and allows cross-communication between apps that ultimately benefits the individual apps. The same will be true for smart cities in the future.”

Tam explained that a prevalent example of the advantages of this joined up approach is the way that smart cities have, in general, handled the pandemic better through big data, with Alipay and Tencent’s WeChat Pay systems, leaving a continuous breadcrumb trail of where you’ve been.

“The power of the app-based health QR codes required in China is fascinating. For example, if you walked into a Starbucks and the following day the barista was tested positive, after that, your health code will turn from green to yellow or even red without any of your input. This traffic light system now applies to everyone,” Tam further explained.

The group is also involved in the medtech company WeDoctor (wēi yī微医), which facilitates online medical appointments. On 23 January, WeDoctor launched an initiative to get doctors specialised in respiratory, infection and internal medicine across China to help Wuhan. On the first day, 1,500 doctors registered; now, it has over 56,000 doctors online. The app reports to have had 1.8 million consultations and 138 million unique visits.

“This negative consultation saved countless millions from clogging up the hospitals. Why? Because people are so used to WeChat and Alipay,” Tam said.

Tam’s CEO-centric investment philosophy stems from his conviction that the chief executive officer is also the customer and it is a mistake to only look after the investors or funders. With the mindset that the CEO is the person who makes the money, Tam’s approach involves strategically supporting the CEO and management team.

“The CEO is my golden goose,” Tam shared. “Ultimately, I should help him lay as many eggs as possible.”

The two ‘higher-level’ attributes Tam looks for in CEOs are ‘earth-shattering’ passion and long-term partnerships. He explained, “Look at Jack Ma of Alibaba, Li Ge of WuXi and Edward Tian of AsiaInfo. All of them are full of passion with no sense of money, yet they are the ones who will make a ton of money for you. Second, I am looking for life partners. Look at Jack (Ma). When do you want to break up with him? It takes us a long time to find a suitable CEO, and I want to be with them forever.”

The secondary attributes Tam looks for are what he calls XX and XY, wherein XX stands for xuéxi (学习), which means learning in Chinese, someone who learns non-stop every day and becomes better, while XY stands for xīyǐn 吸引, which translates to charisma and attraction in Chinese.

“When we first saw Jack Ma and Edward Tian, they were nothing like they were today, but their journey is all about learning,” Tam shared. “The best CEOs tend to be salespersons or teachers, as they somehow have a natural tendency of attracting people. People who can attract you in a few minutes can build all the experts and masters around them.”

Tam is happy to admit he hitched a ride by listening very closely to Joe Tsai, Alibaba’s co-founder and current executive vice chairman, after he left his rival employer at the time to join Alibaba in 1999.

“Jack Ma was either a genius or lunatic and nothing in between. It was 50/50. We had no idea, but our good friend Joe Tsai, a smart guy, is leaving his employer and going all in. That is when the penny dropped,” Tam admitted.

Tam distinguishes Venturous Group’s mission and strategy to transform towns and cities in China from the fate of some of the ghost towns and economic new areas dotted across the nation by making them intelligent.

“Ghost towns are a fact and examples of what fails. What is a smart town? It is not the town that matters but the smartness. Smartness comes from hardware, software and services,” Tam explained. “The problem is that those ghost towns were built by certain property developers who were overly focussed on hardware and not technology. They got the hardware right. That is easy. But where was the software, the people? You need to have restaurants, cinemas and schools. They did not deliver on the software and services. There needs to be an ecosystem.”

To this end, Venturous Group is working with CEOs to strategically synergise capabilities. The first test site for applying this kind of approach is a two-square-kilometre area in a new town just outside Beijing, not far from the 2022 Winter Olympic site. Twenty-three minutes (73 kilometres) by bullet train to Beijing city centre, the town is located along the new 5G-corridor running along the high-speed rail line that passes through Beijing technology hubs Zhongguancun and Shangdi.

Tam said, “After we identify our smart town location, we will work with partners to have the digital infrastructure built in a plug-and-play function. Twenty years ago, we experienced version 1.0, where companies like AsiaInfo created the bandwidth, broadband and fibre digital infrastructure, which enabled the digital players like Baidu, Tencent and Alibaba to create their products and services.”

“This round, the digital infrastructure is artificial intelligence, 5G, Internet of Things, and others, which will create a new generation of products and services. With an open Smart City Operating System – plugging in our and others’ key smart city technology solutions and companies – connecting everyone, everything and everywhere, we can truly build the city of the future, the Smart City,” Tam concluded.

Ackman and activist peers limp to end of dismal year

The economy of the Philippines wobbles

The government wants to tame inflation and improve infrastructure

East Capital Holding’s Hirn: “Being state-owned is not the issue”