Countdown to COP26: Are banks green or still grey in the fight against climate change?

The world’s 60 largest banks from Europe, Asia and North America continue to funnel nearly $3.8 trillion into fossil fuel projects from 2016 to 2020. Most nations are missing their Paris Agreement targets by a long shot.

Despite the strenuous efforts put together by the world leaders by signing the Paris Agreement in 2015, major banks around the globe continue to finance fossil fuel projects. According to the Banking on Climate Chaos report 2021, a total of $3.8 trillion was poured into carbon emitting projects between 2016 and 2020. The report also showed that although 2020 was a calamitous year for the global fossil fuel industry, financing by banks was higher last year than in 2016. Financial lenders invested $3.8 trillion in polluting industries like coal, tar and oil.

Patrick McCully, energy analyst at Reclaim Finance, one of the NGOs that published the report, said, “Banks are not yet prepared to get serious about setting clear red lines for their fossil fuel clients nor are they prepared to drop these clients if they don't meet strict transition criteria”. Highlighting the need for stricter government regulation he said, “It is not enough to believe that banks will take sufficient steps voluntarily”.

Noel Quinn, chair of sustainable market initiatives (SMI) financial sector task force and group chief executive of HSBC, in a press statement said, “We have to establish a robust and transparent framework for monitoring progress against the objective”.

Article 2.1c of the Paris Agreement refers to the alignment of public and private financial flows needed to successfully address climate change. One of the core objectives therefore is making financial flows consistent with goals on low greenhouse gas emissions and climate-resilient development. This can amplify financial resources to strengthen global response to the looming threat of global warming. But the findings from this report demonstrate that the banks are far from aligning their carbon emission targets that could help us move closer to a green future. 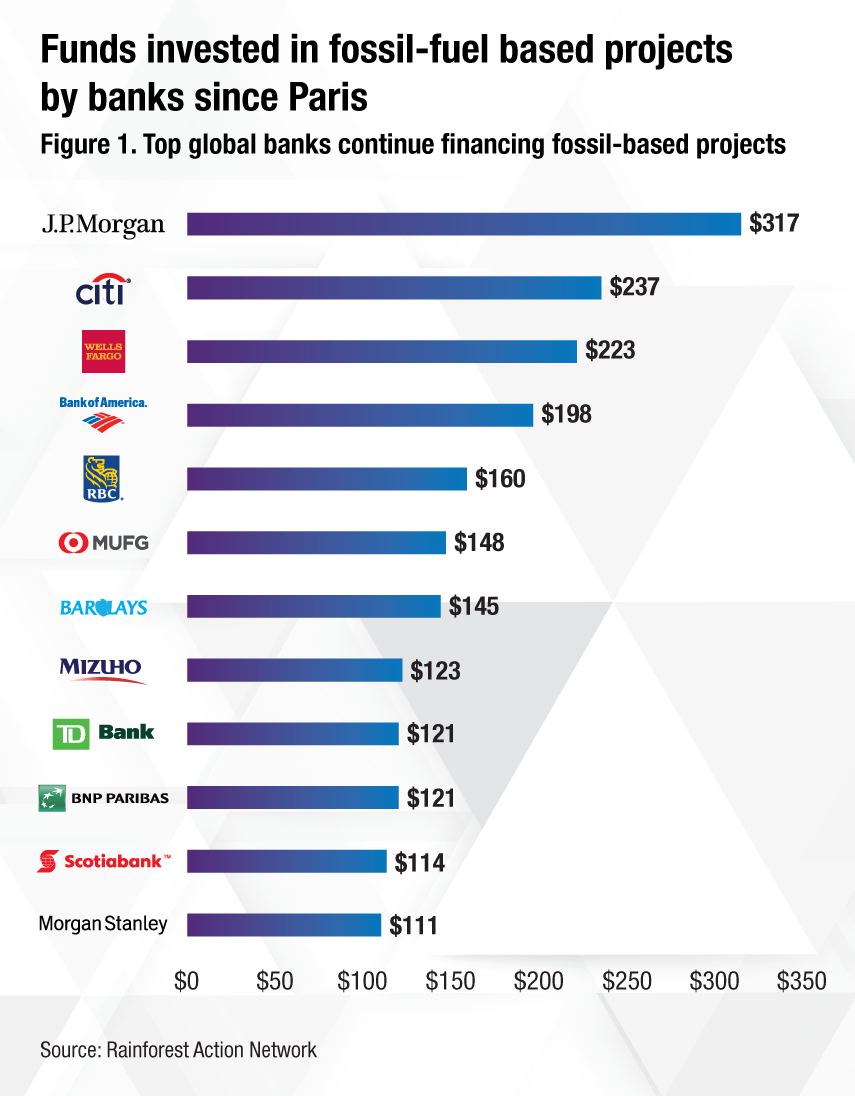 To bring about concerted efforts and coordinate commitments among financial institutions the Glasgow Financial Alliance for Net Zero (GFANZ) was launched on the eve of President Joe Biden’s Global Climate Summit in April this year. It is led by UN Special Envoy on Climate Action and Finance, Mark Carney. Ahead of the United Nations Climate Change Conference popularly known as COP26 which is scheduled in November this year, the new alliance GFANZ aims to bring together existing and new net zero initiatives under a uniform strategic forum to accelerate the drive towards net zero emissions by 2050.

Forty-three banks including Lloyds Banking Group, NatWest, Barclays, Citi, Morgan Stanley, HSBC and Santander from 23 different countries have joined the GFANZ. In total, it has 160 of the world’s biggest banks, asset managers and financial institutions that together manage assets over $70 trillion. Carney referred to GFANZ to be “the gold standard for net zero commitments in the financial sector”. He added, “GFANZ will ensure the financial system works together to broaden, deepen, and accelerate the transition to a net zero economy”.

GFANZ plans to deepen the existing climate change efforts and gather more momentum and support among actors in the financial sector to achieve the targets of the Paris Agreement. It aims to offer strategic and technical coordination on how firms can take steps to align with a net zero future. The members of GFANZ are expected to coordinate efforts towards faster decarbonisation of the economy using science-based targets, set interim 2030 targets and pledge to transparent reporting and accounting.

World’s largest asset managers also formed a group called the net zero asset managers initiative in December 2020 to support climate change by setting up carbon emission targets. This initiative has grown in number and assets with 87 signatories and $37 trillion total assets. Even if these targets under the different initiatives are aligned to the Paris Agreement commitments, they still lack planning and stricter regulations. These targets only offer the end goal but lack a clear roadmap to get there. Financial sector is encouraged to disclose their own goals towards Paris Agreement but it is not mandatory nor are they penalised on defaulting. Governments are at the centre of enforcing regulations that support green initiatives and steer the financial sector towards a post-carbon economy. This is not about centralising power but embracing the government’s planning function and coordinating a nationwide strategy that guides the lenders to shift their investments towards low carbon activities and projects.

Brian Moynihan, co-chair of the sustainable market initiative (SMI) and chairman and chief executive of Bank of America, in a press statement said, “This commitment to net-zero by the SMI financial services leaders is an example of the leadership that the CEOs of SMI companies can generate by working together”.

On 12th December 2015, 196 countries signed the historic Paris Climate Agreement. They pledged to limit global warming to well below 2, preferably to 1.5 degrees Celsius, compared to pre-industrial levels. Six years later we are now gearing up for COP26. It was rescheduled to 2021 due to COVID-19 pandemic. The signatories are expected to outline and communicate their efforts to tackle climate change which are popularly known as nationally determined contributions (NDCs). 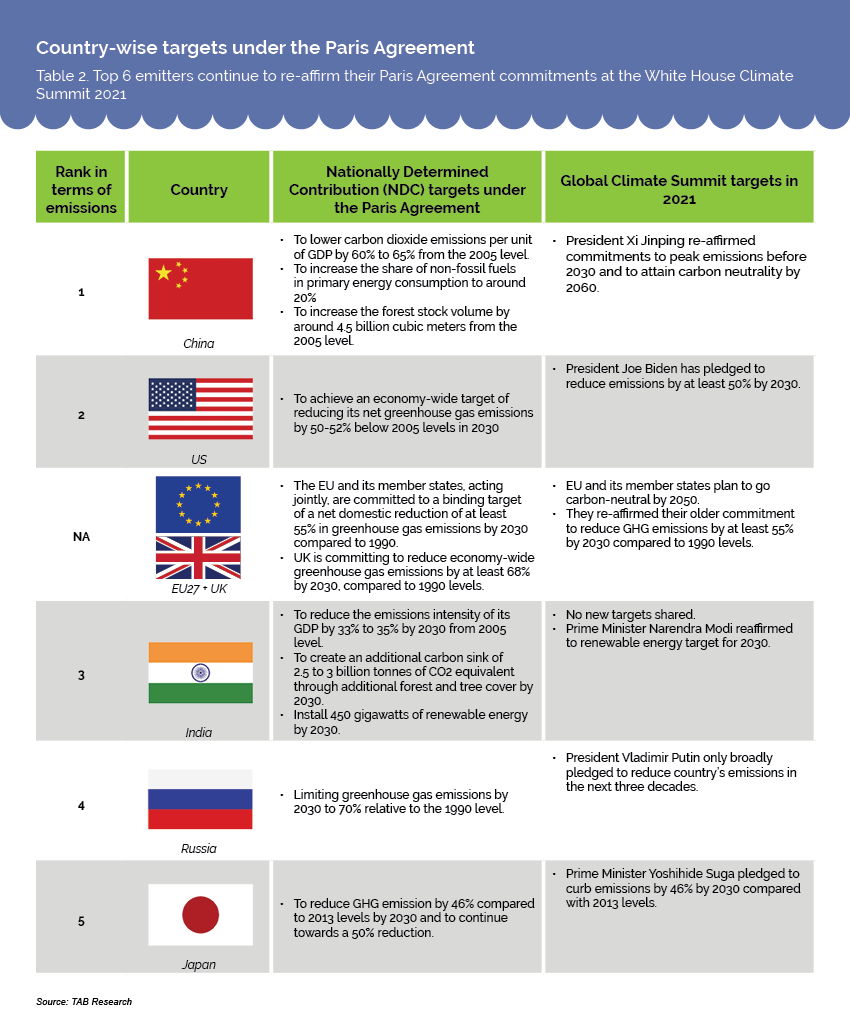 In 2017, former US President Donald Trump announced to withdraw from the Paris Agreement despite being the world’s second largest carbon emitter. Joe Biden after being elected president early this year reinstated their commitment to the agreement and rolled out a number of executive orders to tackle climate change. Recently, the White House under Biden’s administration convened a virtual Climate Summit that was attended by forty global leaders. The summit aimed to renew America’s commitment on climate change issues, showcase that US is taking rein of the global struggle against climate change and simultaneously garner stronger support from other world leaders on this global issue.

Commitments from other countries:

China joined the Paris Agreement in 2016 ahead of the G20 Summit along with the US. During the COVID-19 pandemic, President Xi Jinping made a surprising announcement that China would attain carbon neutrality before 2060 and it will cut down its CO2 emissions per unit of GDP by more than 65% by 2030. 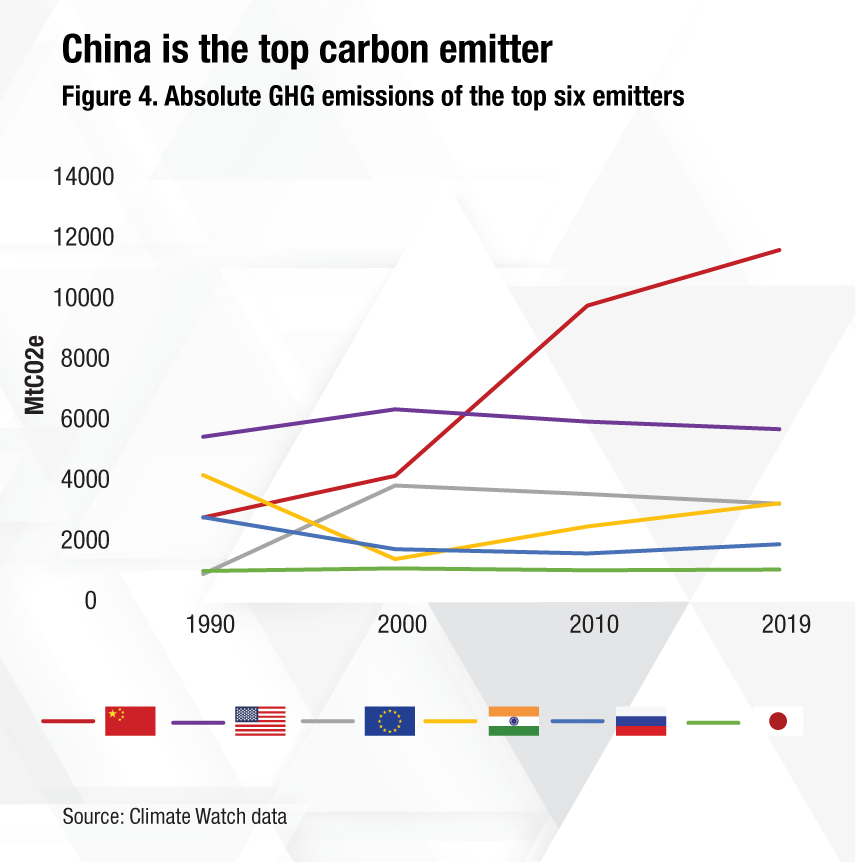 US ranks second to China with respect to greenhouse gas (GHG) emissions. US citizens’ carbon footprint accounts for roughly three times the global average. In the US, climate change is a highly divisive issue among politicians. To date, US lacks a robust federal climate policy. The members of the Republican Party have blocked efforts and actions made by the democratic government to combat climate change. Following Biden’s presidential success, he overturned Trump administration’s 2019 decision to withdraw from the Paris Agreement. Biden even announced that US would achieve a 50%-52% reduction from 2005 levels of GHG by 2030.

Dire assessments but fuzzy roadmap to address the crisis

The world leaders, financial organisations, banks and other relevant actors constantly offer critical assessment of climate change and the looming threat in the future. This has resulted in the formation of number of climate change consortiums like Climate Action 100+, Net Zero Asset Managers Initiative to name just a few. Net zero is the new buzz word but this goal is meaningless if the banks do not have a clear roadmap and continue taking refuge under the garb of carbon credits. McCully said, “Carbon credits are and always will be highly problematic and should absolutely not be used by banks or other financiers to meet their carbon reduction goals. Very often it does not represent actual emission reductions and even where they do, they don't represent a net reduction in global emissions”.

The most detrimental contribution towards GHG however is indirect through financing projects and companies that continue to produce GHG emissions. Banks therefore are the key players as they are the major financiers who drive these harmful industries like coal, oil and gas, thereby consciously delaying the transition from polluting fossil fuel intense to renewable energy-driven economic growth. We are soon approaching the point of no return. If we continue this course, it will not only be difficult but financially excruciating to prevent the widespread catastrophic impact of climate change. Billions will be spent to reverse the damage and rebuild the ecosystem, along with untold human suffering.

“The most important green initiatives are those which involve stopping finance for fossil fuels and deforestation as these require the banks (and their bankers) to actually forego revenue, at least in the short term,” added McCully.

The deluge of net zero emission consortiums will reap no benefits until banks completely stop financing fossil fuel industry. McCully pointed out, “Only if the financial institutions that are signing up for them (consortiums) are actually willing to rapidly make some serious changes in how they do business”. He further suggested, “Dropping fossil fuel clients that are not clearly committed to transforming their businesses”.

Banks may retort that they have raised their lending towards renewable energy projects; that they are increasing their assets under sustainable investments but very few banks have pledged to end financing coal, gas or oil projects. Those who have initiated these efforts have set targets for distant future like 2039.

We have witnessed how banks inflated the housing bubble during the global financial crisis (GFC) in 2008, similarly banks being complicit is a systemic risk that curbs the efforts to attain Paris Agreement goals.

Volatility — how low can it go?

China’s share of global and Asian exports is falling