Archegos collapse: Perils that lurk beneath an unsupervised family office 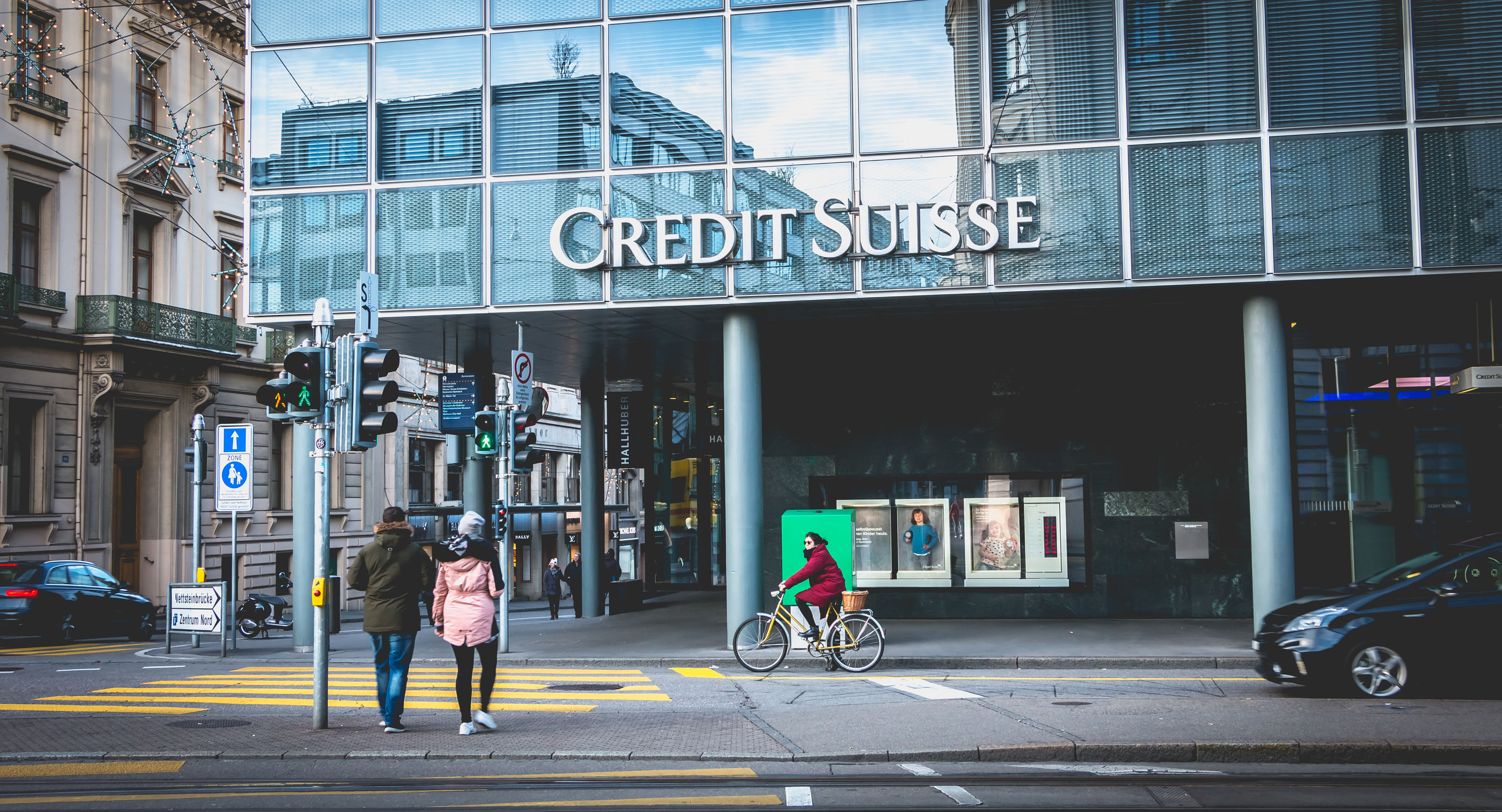 The multi-billion dollar losses announced by Credit Suisse and potentially more from other global banks in the Archegos collapse are clear signs that apparently extensive financial reforms in the past decade and more have simply not gone deep and wide enough to rein in excessive risk taking from all counterparties in the industry.

The full extent of losses related to Archegos Capital Management (Archegos) is quickly unfolding as Credit Suisse announced a first quarter 2021 financial charge of CHF 4.4 billion ($4.8 billion) because of the "US-based hedge fund". Thomas Gottstein, its CEO, said,“The loss we report this quarter, because of this matter, is unacceptable”. Eight other global banks including Goldman Sachs, Morgan Stanley, Nomura, Mizuho, Deutsche Bank, Mitsubishi, UFJ Financial Group and UBS are facing significant losses estimated to be in the range of $5 billion to $10 billion by an earlier JP Morgan report.

However, the Wall Street Journal (WSJ) estimates Credit Suisse’s total loss exposure to be as high as $20 billion.

The JP Morgan report further estimates $2 billion as potential losses for Nomura. Others, including Morgan Stanley, Goldman Sachs and Wells Fargo, collectively sold more than $20 billion worth of stocks they held as hedge for their trades with Archegos to limit their own losses but haven’t disclosed their official figures yet.

Hwang was the protégé and a so-called “tiger cub” of Julian Robertson, the legendary hedge fund manager of Tiger Management. After the closure of Tiger Management in 2000, he launched his own fund Tiger Asia Management with $25 million investment from Julian Robertson, which at its peak managed over $5 billion. In 2012, Hwang pleaded guilty to securities manipulation and insider trading and agreed to pay $60 million to settle the charges before the Securities and Exchange Commission (SEC).Two years later, he was banned from trading in Hong Kong for four years. In 2013, Hwang decided to open a family office, Archegos Capital Management, to manage his $10 billion family money. Family offices are exempt from any regulations in the US and so this was a smart move. .

Family offices flourished in the 2010s to escape SEC regulation 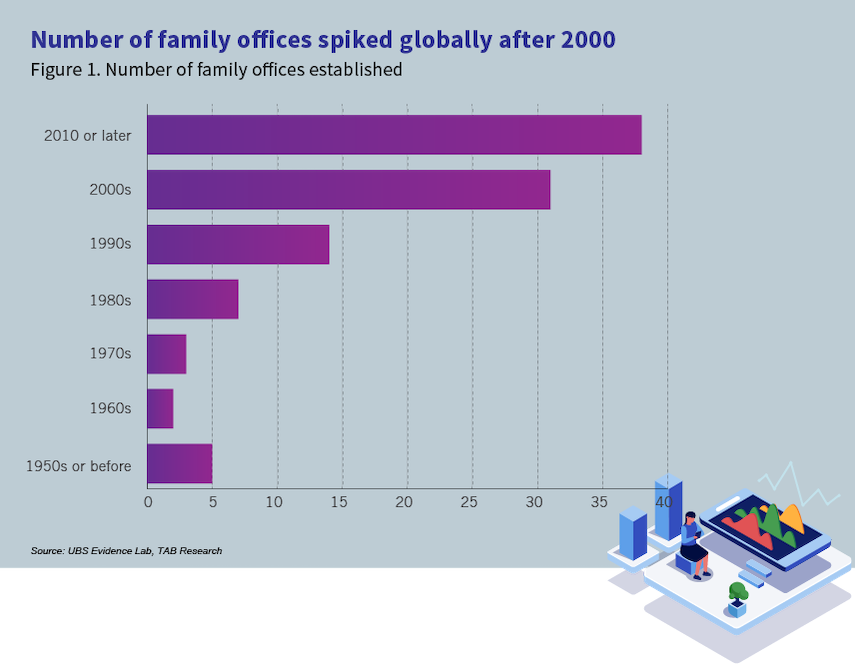 Thirty-eight percent of family offices came into existence in the 2010s, the most in all the decades since 1950s. The rapid growth cannot be solely explained by the general development of wealth management industry alone. Capgemini, , cites “hedge fund conversions to escape SEC regulations” as one of the main growth drivers behind the big bang of family offices from 2010 onwards.

The 2010 Dodd-Frank Act authorises the SEC to enforce registration and disclosure rules for hedge funds managers. According to Title IV the Private Fund Investment Advisers Registration Act of 2010 (PFIARA) of the Dodd–Frank Act, , hedge funds with more than $150 million assets under management (AUM) require mandatory registration and information disclosure related to their trade and portfolio..

On the flip side, family offices are exempted from such regulations. According to the Family Office rule of SEC, a family office is qualified to be exempted from the regulatory burdens associated with registration after meeting three general conditions:

In 2019, US Commodity Futures Trading Commission (CFTC) that oversees the broader trillion dollars swaps market, including the risky “total returns swaps” that led to Archegos’s downfall, approved rules that exempted family offices from CFTC registration requirements and exempted family offices from a new CFTC rule designed to bar bad actors from acting as Commodity Pool Operator (CPO) if they are subject to statutory disqualification. 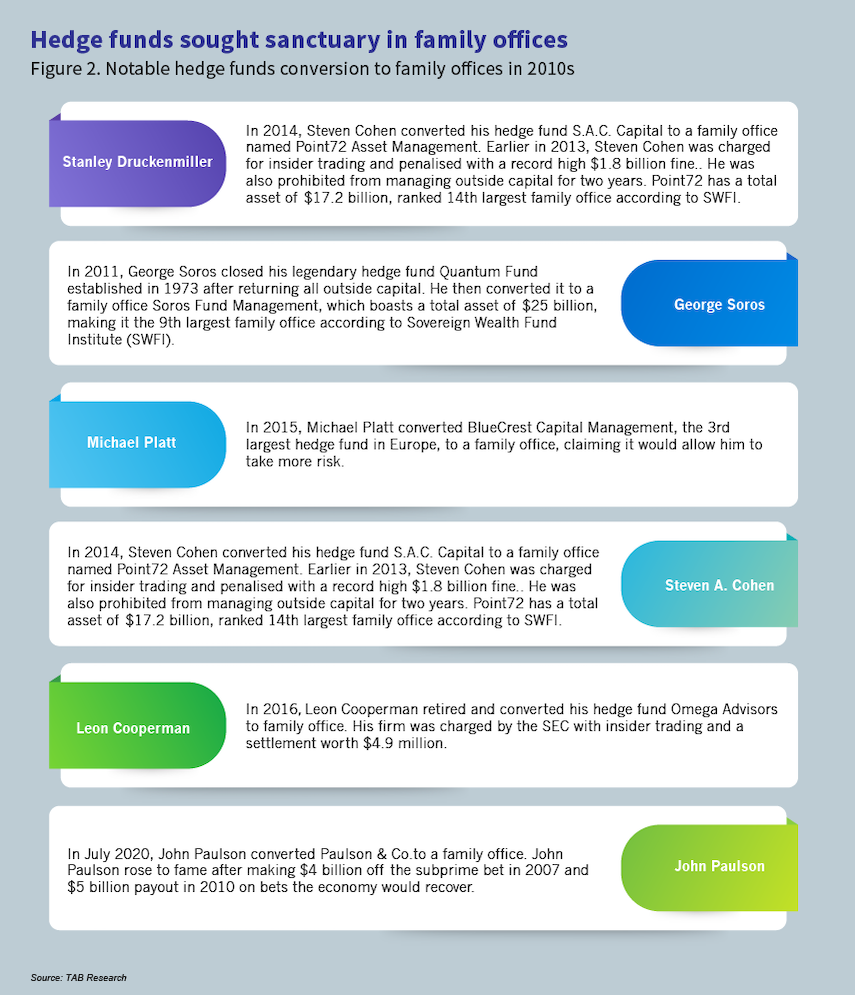 Given the relaxed regulations for family offices and stricter scrutiny requirements for hedge funds, it doesn’t come as a surprise that many hedge fund managers would find converting their businesses into lightly regulated family offices as an attractive proposition.

This metamorphosis is a textbook case of regulatory arbitrage. Notorious insider traders and convicted financial criminals like Steven A. Cohen and Bill Hwang sought sanctuary in the form of family offices. Hwang was able to continue wreaking havoc on the financial system from his shady family office hideout and caught the whole world by surprise.

Furthermore, to pursue higher profits with riskier investment strategy is also a major motive behind these conversions. Leon Cooperman from Omega Advisors, who reached a settlement with the SEC for his insider trading accusation, stated to Bloomberg that he did not want to continue “chasing the S&P 500 and generating returns on investor capital”, and returned all outside capital to convert to a family office in 2017.

Move towards a differentiated regulatory system for family offices

“One central challenge for prime brokers is the opacity of client positions held at other prime brokers, making it difficult to ascertain the clients’ overall financial well-being and exposures,” added Robertson.

The regulatory exemption for family office is based on the premise that as family offices do not manage external assets their spillover effect on the wider financial system is limited. It is also assumed that they would exert greater caution and prudence as it involves their own vested interest.

Private Investor Coalition, a lobbying vehicle formed by 50 family investment funds, formed their lobbying pitch on these exact same assumptions. According to WSJ, the coalition claimed that “their funds are aimed at maintaining wealth, not investing aggressively like private-equity firms or hedge funds, and therefore pose no systemic risk to the economy”. They disseminated letters to lawmakers saying, “there is ‘no public interest’ in regulating private family accounts like hedge funds or private-equity firms.”

The naivety of these assumptions should be sneered at after the downfall of Archegos and the lobbyists’ arguments should be dismissed when the size of family offices has already surpassed the hedge fund industry. Campden Research estimates global family offices in total managed $5.9 trillion of assets in 2019 well above the hedge fund industry’s $3.8 trillion managed assets in 2020. If the memories of hedge funds’ role in Black Wednesday and Asian Financial Crisis are not lost in time, financial regulators globally should stock-take the potential damage an influential yet lightly regulated industry could inflict upon the market’s financial stability.

It is worth noting that Dan Berkovitz, a commissioner of CFTC, reiterated his objection to loosen oversight of family offices citing the collapse of Archegos as “a vivid demonstration of the havoc that errant large investment vehicles called family offices can wreak on our financial markets”.

In 2020, Securities Industry and Financial Markets Association (SIFMA) wrote to the SEC a request for no action relief. SIFMA offered a definition of a class of family offices called "Institutional Family Offices" and requested the SEC not to pursue enforcement action against broker-dealers that do not treat such family offices as "retail customers." The SEC granted the request for relief in a no-action letter and accepted SIFMA’s definition of institutional family office. According to the law firm Perkins Coie LLP, large family offices, if treated as retail customers, will not be able to make certain sophisticated investments.

As the proverb goes “a tiger never changes its stripes”. Hedge fund and family business are beastly entities in terms of their risk appetite, investment philosophy and ability to use complex financial instruments. For the traditional family offices to thrive, first and foremost, the whole industry must acknowledge the fact that there are ‘tigers’ intermingling with ‘cats.’

The urgent task for regulatory watchdogs is to identify the ‘tigers’ and design a differentiated regulation that applies separately for ‘cats’ and ‘tigers’. It is unacceptable to take excessive risk like a hedge fund but take refuge as a family office. The loophole for such regulatory arbitrage must be addressed for global financial stability. The SEC’s acceptance of SIFMA’s definition of institutional family office is certainly a positive development.

Additionally, the selection of managers for the family office business is equally important. In recent years, the business witnessed a positive development by attracting more talents from endowments known for long-term investments and generating continuous returns using large allocations to alternative asset classes. Edgar Nehme, managed the endowment of King Abdullah University of Science and Technology, is now the  chief investment officer at a Robert Bass family office. Ray Dalio, the legendary hedge fund manager and founder of Bridgewater Associates, recruited Robert Zimmerman, who previously ran $46.1 billion endowment of University of Texas Investment Management Co., as CIO of his family office in Singapore. As a hedge fund veteran, Dalio surely knows better that his family money should rest in safe hands.

Universities have been mobilised to help

East Capital Holding’s Hirn: “Being state-owned is not the issue”