Global exchanges ramp up efforts for a sustainable recovery 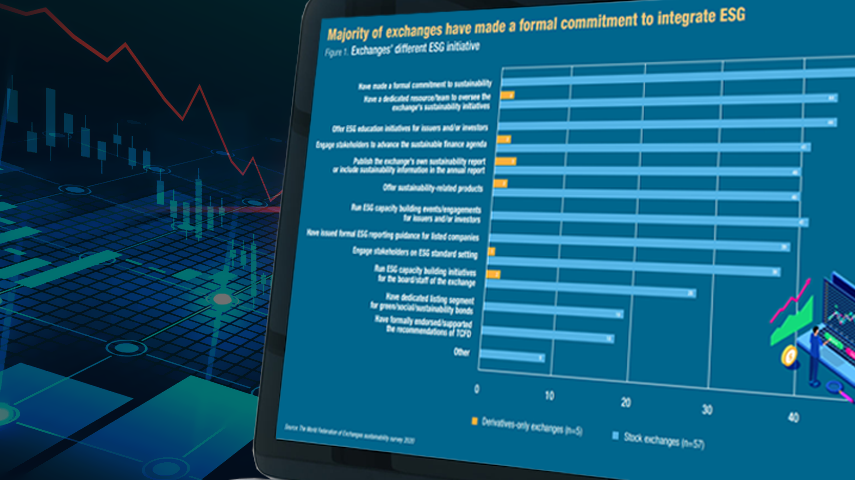 The World Federation of Exchanges (WFE), a global industry group for central counterparties (CCPs) and exchanges, recently published its 7th annual sustainability survey. The survey takes into account the nature and extent of ESG involvement by WFE members.

WFE covers both stock and derivative exchanges. In this year’s survey, questions that would gauge gender equality at the board level and adoption rates of different sustainability standards were included. Since its inception in 2014, the survey has been reporting an increasing ESG engagement among the WFE members. As a collective action, exchanges offer an insight into corporate governance and regulation of corporate disclosure. Recently, they have also begun to promote ESG considerations for instance the WFE-UN sustainable stock exchange now offers guidance on how derivative markets can integrate sustainable development. James Zhan, director of United Nations Conference on Trade and Development's (UNCTAD) division on investment and enterprise, said, “Stock exchanges are uniquely positioned at the intersection among investors, companies, and regulators. They can play a key role in promoting responsible investment and sustainable development”.

Sixty-two exchanges participated in this year’s survey, of which 87% are WFE members. Out of the 54 WFE member respondents, five are derivatives-only exchanges.

The survey shows that 79% of the respondents have “made a formal commitment to sustainability” while 74% have dedicated resources/teams to oversee the exchange’s sustainability initiatives (Figure 1). Moreover, focus on ESG education and awareness is on the rise according to the survey results. 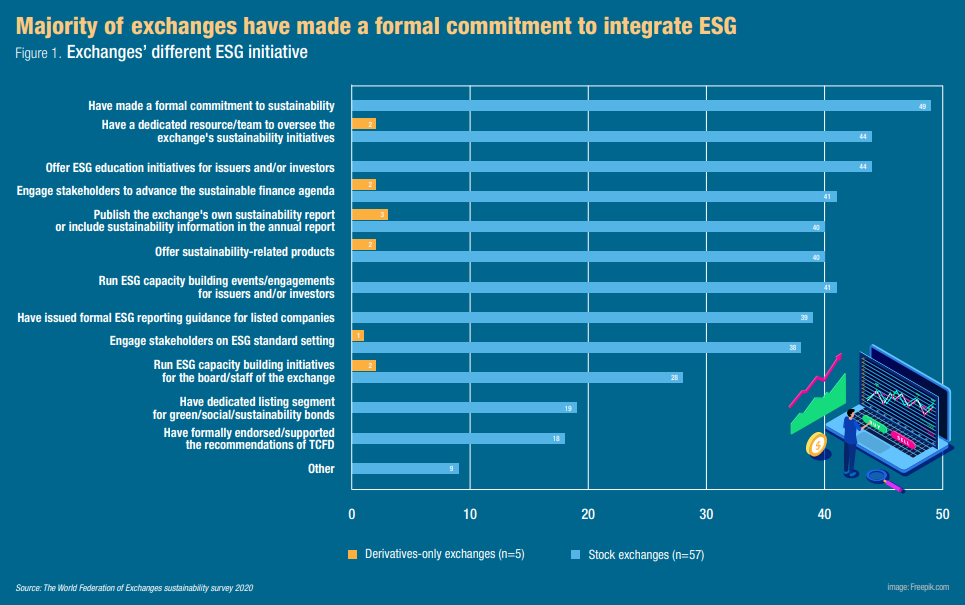 In addition, WFE has designed its own sustainability principles that guide the WFE member exchanges on promoting sustainability in their markets. “Embedding sustainability into the exchange's governance, strategy and organisation structures" continues to garner highest level of engagement with support from 94% of respondents (Figure 2). 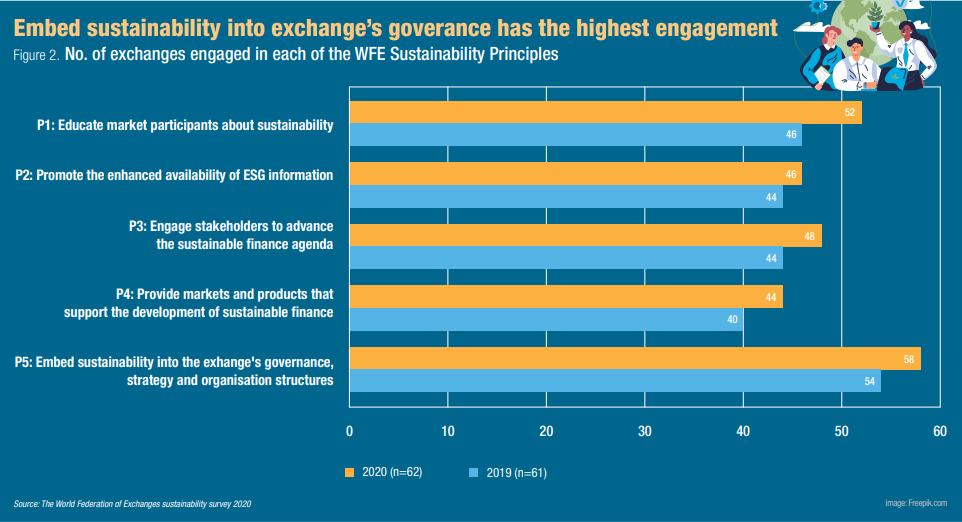 When it came to understanding the motivations behind increasing ESG engagement, rising concerns around sustainable business models and expansion of business are the most cited reasons at 89% (Figure 3).  This shows that participating exchanges are considering sustainability as an avenue for creating new business opportunities along with looking at it as an operational and corporate responsibility. 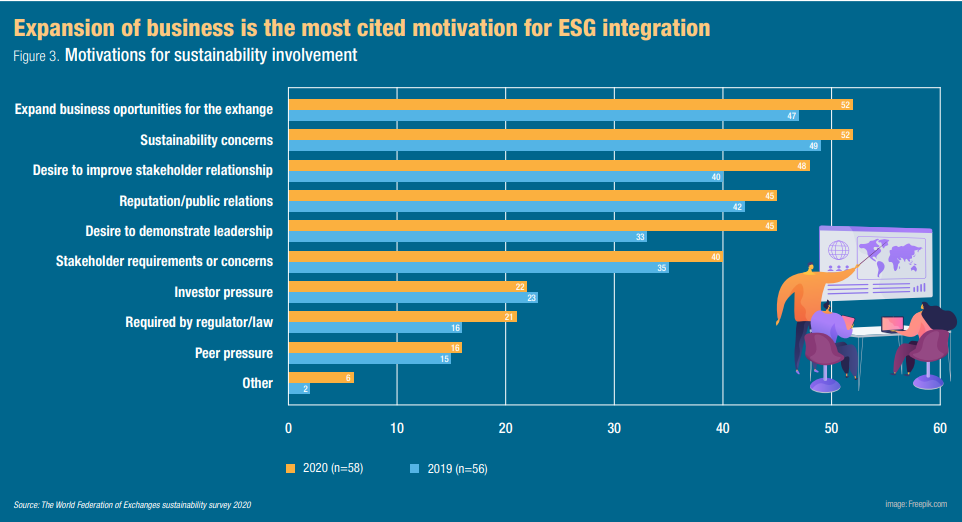 WFE members are highly motivated by the UN SDGs[  particularly SDG 5 on gender equality and so they have began collating gender-related statistics. In terms of gender diversity among board members, the percentage of female members in the exchanges’ board is higher in the Americas and the EMEA region.

Fifty-six percent of the exchange-listed companies have a least one female in their board. Overall, the trend has been positive towards attaining gender parity and it has clearly been one of the exchanges’ sustainability key focus. Initiatives that encourage increase in female representation are being implemented. Moreover, the survey also collected information on whether the exchanges had targets to increase female representation and 37% responded positively.

According to the survey results, 95% of the respondents cited some demand from the investors for ESG disclosure. This number has increased from last year’s survey which was at 87%. In terms of drivers, the exchanges remain the major promoters of ESG disclosure in their respective markets followed by securities regulators. However, lack of globally accepted set of standards and disclosure in reporting has been cited as a major concern in the survey. As a result, most exchanges leave it to the discretion of the companies to select any reporting format that they find suitable based on their respective needs and business.

Reporting format refers to presentation of ESG information to stakeholders while reporting standards are the rules for ESG measurement and disclosure which are also few in number. So far, none of the surveyed exchanges report mandatory ESG disclosure. In terms of which ESG framework is widely used, the survey shows a preference for Global Reporting Initiative (GRI). It is a positive trend with 62% of the responding exchanges promoting the GRI this year as compared to “any international standard” which was the highest-ranked option in 2019.

Two years since the publication of Task Force on Climate-related Financial Disclosures (TCFD) 36% of the surveyed exchanges have incorporated it in their reporting guidance while 23% have no plans to include it so far. Therefore, although there is lack of consensus on reporting standards and formats, the survey shows that the exchanges have issued some form of guidance on ESG reporting to the companies. 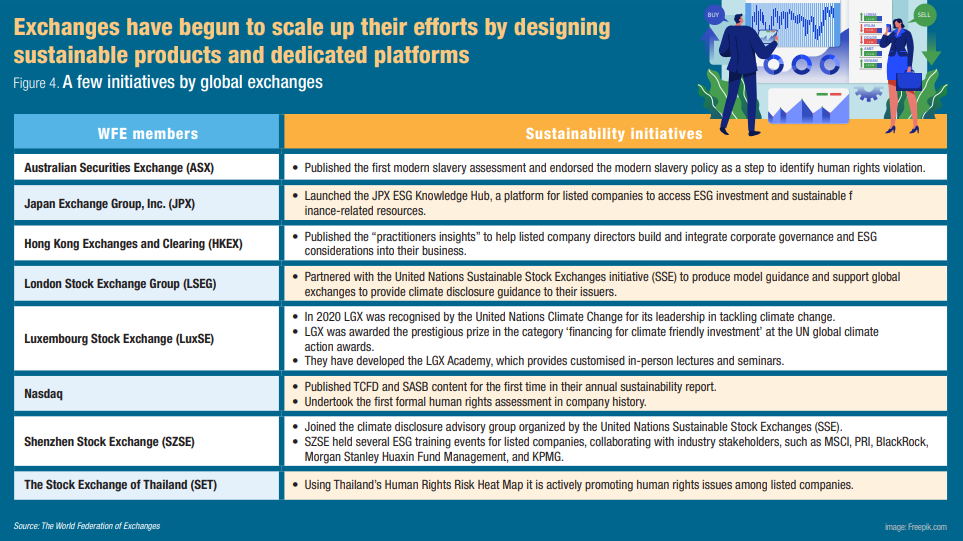 According to Climate Bonds Initiative report, as of last year, 17 stock exchanges globally offered dedicated green bond sections, 11 provided additional visibility to the label and in 2019 global green bond and loan issuance reached a new record of $257.7 billion. The WFE sustainability survey finds hints that exchanges in their own way are making strides towards advancing ESG reporting and efficient ESG integration. However, there is enough room for coalescing ESG standards and reporting frameworks to make them comparable and more transparent. Stock exchanges are uniquely positioned in this nexus between companies and investors. With these two stakeholders looking for guidance on ESG reporting, transparency and performance measurement, exchanges have a crucial role to play. Nandini Sukumar, chief executive officer of WFE, reiterates, “Our survey results highlight the exchange industry’s continued leadership in sustainability matters. Exchanges will play a vital role in the shift towards an inclusive and sustainable global economy”.

Currently, 50% of stock exchanges provide listed companies with guidance on sustainability reporting but they must encourage businesses, regulators and standard setters to raise the ambition in order to align with the 1.5 °C warming scenario outlined in the Paris Agreement. Being positioned as a catalyst between investors and companies, these entities have the potential to promote more efficient capital markets that generate long-term sustainable value.