Who creates the wealth in society

A nation’s wealth is truly a joint creation in which individuals, families, business and government all play crucial parts.

In the first I explored what is meant by wealth. The second looked at companies as creators of wealth, with a digression on the social and economic purpose of business corporations. In this concluding post in the trilogy, I explore who are society’s main creators of wealth.

In so doing, I shall draw heavily on a lecture entitled “What Is the Wealth of a Nation?” that I delivered in 2002, at the end of a freshman economics course. Earlier posts in the trilogy drew on that lecture as well.

The lecture was inspired by the cover of a well-known business magazine that celebrated “America’s Great Wealth Creators,” with photos of dot-com heroes of the day and Jack Welch, the chief executive of General Electric until 2001. The magazine was celebrating, of course, the market capitalization of the companies led by these “wealth creators.”

This occurred toward the end of what we now call the dot.com bubble, as the price-to-earnings ratio — the market price of stocks relative to earnings — soared far above historical values, while silly books like “Dow 36,000: The New Strategy for Profiting from the Coming Rise in Stock” by James K. Glassman and Kevin A. Hassett were greeted with the utmost respect on Wall Street and in the media.

As it turned out, much of the what these “wealth creators” were said to have created was ephemeral (see the graph below and also my post “Jack Welch and the Lone Ranger Theory“), just as the subsequent fabulous wealth created by the financial sector during 2004-8 has been ephemeral.

The point of my lecture was not that businesses and their leaders do not contribute to creating the nation’s wealth. Far from it (see my paper “On the Not So Simple Steps Involved in Starting a Business Venture“). By organizing and focusing a variety of resources in a way that produces products and services designed to please someone, businesses make a significant contribution to the creation of value and wealth 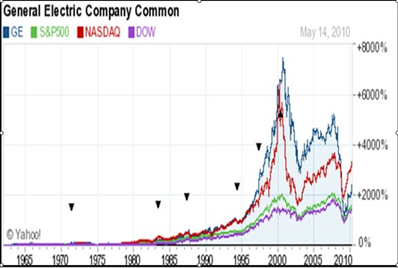 My point in the lecture was merely that the precise magnitude of the contribution a company makes to wealth is not easily measured, and certainly not by its market capitalization. Furthermore, I pointed out, the value and wealth contributed by companies and their leaders come only at the end of a long chain of wealth creation on which businesses capitalize, starting with the basic unit in society: the family.

It is now well recognized that the wealth of modern societies is dictated not so much by the natural resources at their disposal, but by their human capital — the knowledge and skill of human beings and their ability to learn and apply new knowledge on their own.

Anyone who has raised children to maturity appreciates the magnificent contribution conscientious parents can make to this human-capital formation, because much of the education of youngsters takes place in the home. Conscientious parents — and especially mothers — rank as the major wealth creators in modern societies, as, of course, do the offspring whose own effort is crucial in assembling that capital.

Next come educators, especially the visionary and dedicated elementary and high school teachers who succeed in getting their students interested in learning and motivated to amass human capital. The role of such teachers in the wealth-creation process is not sufficiently appreciated in our latitudes.

We at the level of higher education also contribute, of course, to the process of human-capital formation, but we have the privilege of preselecting our students and probably deserve less credit in the wealth-creation chain than do parents and high school teachers.

None of the forgoing is to say that being highly educated and skilled is either a necessary or a sufficient condition for contributing value and wealth to society. Anyone who works, be it for pay or as a volunteer, does so.

Finally, what about government? A common mantra in the United States is that “government does not create wealth, people do.” We shall hear it again and again in the Congressional campaigns this fall. What are we to make of that assertion?

In some sense, of course, the mantra is true. Government per se is just an inert set of legal contracts, as is any business. Thus one should really say: “Government and business do not create wealth. The people working in them do.”

If anyone doubts that the people working in government do not create wealth, let them imagine a society without a well-functioning government. Afghanistan immediately comes to mind.

Governments everywhere in modern societies provide the legal and much of the physical infrastructure on which private production and commerce thrive. Imagine a world in which private contracts can be adjudicated and enforced only by private thugs rather than in the civil courts.

Just as sports contests could not be fairly conducted without a strict set of rules and referees with power, so private markets could not thrive without regulations and regulators with power. A truly laissez-faire market economy would be apt to be a mess, as what Wall Street made of its own business in recent years reminds us.

In my lecture on wealth, I went to some length to provide other examples in which government contributes directly to the nation’s wealth and is, indeed, a holder of much concrete wealth on our behalf.

A nation’s wealth is truly a joint creation in which individuals, families, business and government all play crucial parts. Finding just that mix of efforts and regulations that will maximize society’s well-being is a tricky and never-ending quest.

Re-disseminated by The Asian Banker from The New York Times

AIG to set up post-Brexit base in Luxembourg

Makers of very expensive cars want to be luxury-goods firms